Some chill, rain and prospects of the coldest Rose Parade in its 125 years on New Year’s Day haven’t heralded fair sailing in midweek, but forecasts call for a sunny shirtsleeve weekend for the nation’s best young sailors for the 30th Rose Bowl Regatta at Long Beach this weekend.

Some of the crews from 30 college teams coast to coast and 62 high schools from throughout California who left snow and ice behind may even ask, “This is winter?”

Temperatures should be up to 65 Fahrenheit Saturday and 70 Sunday, under orders from the host United States Sailing Center and Pacific Coast Sailing Foundation.

Top-ranked Yale isn’t coming, but the next five—Georgetown, Boston College, Navy, College of Charleston and Fordham—will be racing.

There will be seating for spectators on the pier at no charge, with food, refreshments and comfort stations available. Racing will start at 11 a.m. each day, conditions permitting.

Georgetown, led by sophomore skipper Nevin Snow, finished a solid 15 points ahead of the runnerup U.S. Coast Guard Academy last year. The San Diego native estimated that although most of the teams were from outside the state, 70 per cent of the sailors were Californians.

One exception was his crew for the final rounds: Liz Mulvaney, a New York City resident who had never seen the West Coast. But she weighed only 125 pounds, which made her and other girls valuable crew in the light winds.

Later last summer Snow and three other Georgetown sailors represented the U.S. at the World University Championships in Italy, defeating defending champion Australia in the finals for first place.

But this weekend the Pointers may face a stronger task against Newport Harbor, which has won the first two of six events of the PCISA series, followed by Point Loma with a third and second and Long Beach Wilson High School with a second and fourth.

The US Sailing Center, once envisioned solely as a training site to help sailors fulfill their Olympic dreams, has developed into a center of training for sailors of every ability, from developmental clinics and hosting of world-class regattas to coaching area high schools and the USC collegiate sailing team. Programs also include Youth At-Risk activities, Learn-to-Sail classes for all ages and disabled sailing opportunities through the center’s own Disabled Sailing Association. Learn more

Alamitos Bay Yacht Club will be hosting the next in a series of Racing Rules talks to further the understanding of the Racing Rules of Sailing and to teach those rules to sailors of all levels. Mark Townsend, International Race Officer, National Judge and Regional Umpire will lead the discussion. A basic understanding of the right-of-way rules as well as some racing experience will be assumed. All ages are welcome.

There is no admission fee. Dinner and snacks will be available from 6pm.

Long Beach Yacht Club is pleased to host the Safety at Sea Seminar on Saturday and Sunday, Jan. 24-25, 2015. US Sailing Safety at Sea Moderator Bruce Brown will run the seminar with the assistance of Alan Andrews, John Jourdane and Dr. Steve Shea.

This seminar will offer a one day Safety at Sea Seminar that will provide attendees with a certificate of completion that will meet US Sailing Special Equipment Requirement (4.3.1). Don’t miss this tremendous opportunity for Safety at Sea training before the 2015 regattas begin.

There will be an optional second day offered for those interested in hands on (in the water and more) to qualify for an ISAF Safety at Sea Certificate. This group will be limited to 40 (swimming pool size and time allotment to cover the material).

RIO 100 just crossed the finish line minutes ago in fourth place in this year’s Sydney Hobart Race, just behind Ragamuffin 100 and just ahead of Black Jack.

The Women’s Sailing Convention has just opened registration for the 26th Annual Convention which takes place on Feb 7th, 2015 at BCYC in Newport Beach. 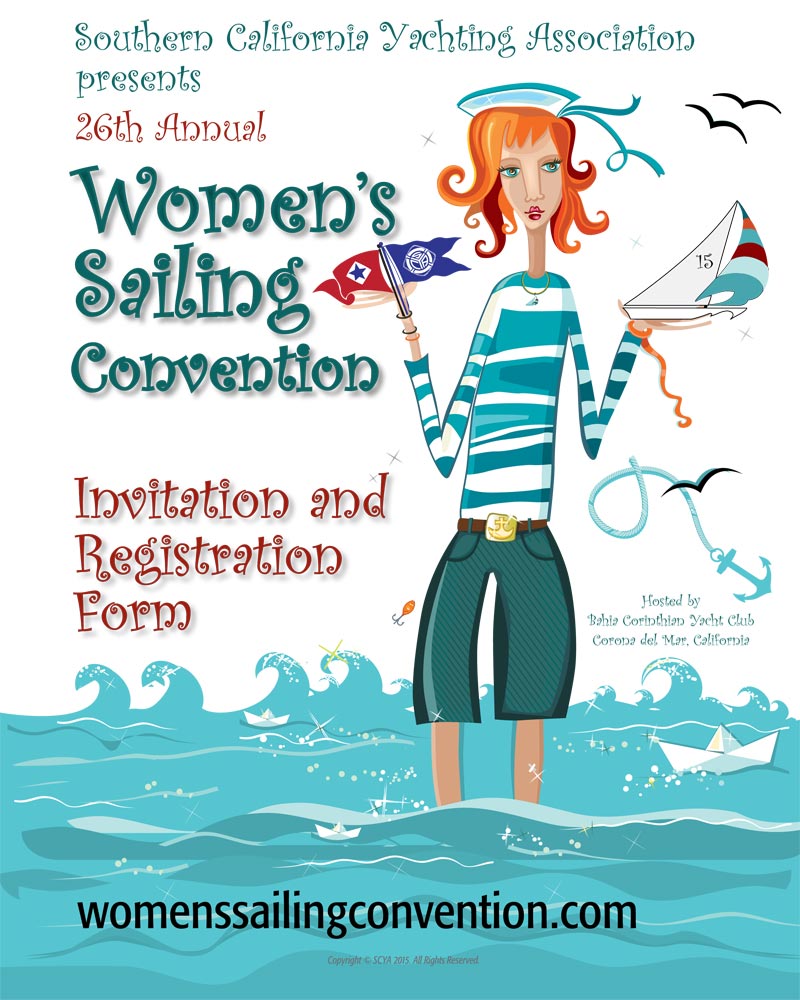 A full day of on and off the water classes are scheduled.

Link to the class schedule and brochure.

RIO 100, a soon to be SoCal based 100 footer, is entered in this year’s Sydney to Hobart Race.  After the S2H she will come out to Southern California to compete in the Cabo Race and TransPac.

RIO is one of five 100 footers in this race.  SCSN covered her launch earlier this year and that article can be seen here.  Her four other competitors for line honours are Comanche, Wild Oats XI, Perpetual Loyal and Ragamuffin 100.  RIO is the only 100 footer with a fixed keel, the other four are canters with daggerboards, some have powered winches and others do not.  Each of the five have specific conditions that they excel at, making this a real interesting race as wide variety of conditions is forecast.  RIOs forte is in light to medium air running and broad reaching.

The race starts at 1pm Sydney time on Boxing Day, December 26, 2014.  That equates to 6pm Pacific Time on December 25th, and live video coverage can be seen at the Rolex Sydney Hobart Website.

Long Beach’s Mike Van Dyke is one of the crew on RIO for this race, and he has agreed to a post race interview to recap this race for us. There are several other SoCal sailors on the crew, see below:

This should be a great race to follow this year!

From the ABYC Junior Sailing Program Website:  We have scheduled sailing clinics during the Spring which are open to members and non-members.   Below are the dates and times of each clinic offered. Boats should be rigged before the clinic start time. All sailors must know how to swim and bring their own life jacket. We recommend that they bring sun screen, sunglasses, hat or visor and closed-toed shoes. It is also a good idea to bring a change of clothes and towel.

Fun Friday Sailing will begin the first Friday of March, 2015. We will sail every Friday in March, April, and May from 4pm to 6:30pm after school. Come for one, come for all, all boats welcome!! Remember these are not racing days, simply fun on the water.

Charter Sabots, Optimists, and Lasers are available if your sailor does not have his/her own boat for a per day fee of $50. Please contact the Junior Sailing Office to request a charter.   All Registration forms must be completed prior to first clinic day.

If you have any questions, wish to pay per day, or are requesting a charter boat please email Allie. Need a spot in the yard for your boat? Contact Sheila at 562-434-9955.

Gerald (Jerry) Dennis Thompson, a Southern California champion sailor of international acclaim, passed away peacefully at his Long Beach, California home on December 20 after several years of battling cancer. He was 75 years.

Jerry was born on January 30, 1939 in Seattle, Washington. His sailing career blossomed early after the Thompson family moved to Long Beach in the 1940’s where he sailed a Naples Sabot in Alamitos Bay. In consecutive years 1952 and 1953, he was Junior National Champion of the Naples Sabot class. The Naples Sabot class is the Southern California breeding ground for multiple Olympic and Americas Cup sailing champions.

In 2005, Jerry came back to claim the Sabot Masters championship. Most recently, he had commissioned a hand built wooden Sabot, which he regularly sailed in his 70’s on the local Sabot circuit. He also recently campaigned in the Lido 14 class winning the class championship trophy with his girlfriend and crew Mandi Smith in 2012. Jerry was a long time distinguished member of Alamitos Bay Yacht Club and he served as Commodore of the club in 1971.

At Long Beach Wilson High School, Jerry was a standout basketball player on the Varsity squad earning all-city and all-coast honors. Following High School, he went into the family business and later became the owner of Bailey Manufacturing, which produces rehabilitation and physical therapy equipment. This business venture took the Thompson family including Jerry, his wife Nancy, daughter Kim, and son Brad to Akron, Ohio for several years in the 1970’s. The family then returned to Jerry’s sailing roots in Long Beach.

Jerry’s sailing resume will best be remembered for his time in the International Snipe Class. He arguably has logged more hours at the tiller, sailed in more regattas, and owned more Snipes than any sailor in the history of the class, which boasts more than 30,000 boats. He sailed his first Snipe in Alamitos Bay at the age of 13 and later qualified for the prestigious Snipe Western Hemisphere Championship in Bermuda at age 17 where he placed fourth. Since that time, Jerry has sailed in multiple World, Western Hemisphere, North American, and US National Championships.

In 1975, he was North American Champion and in 1988 he served as Commodore of the Snipe Class International Racing Association. His Snipe career extended into the Masters circuit where he was a seven time US National Champion. He was a true Corinthian who earned the admiration and respect of sailor’s worldwide for his sailing skills, camaraderie, and boyish pranks. The Snipe class mission statement is “Serious Sailing, Serious Fun.” Nobody lived that motto more than Jerry Thompson.

Jerry is survived by his brother Lee Thompson, his son Brad Thompson, his daughter-in-law Mary Thompson, and granddaughters Hailey and Samantha Thompson. In lieu of flowers, donations may be made in Jerry’s memory to the Alamitos Bay Yacht Club Junior Program, the Snipe US Perpetual Fund, and the American Cancer Society.

A celebration of Jerry’s life will be held on his birthday on January 30 at 2 pm at Alamitos Bay Yacht Club in Long Beach, California.